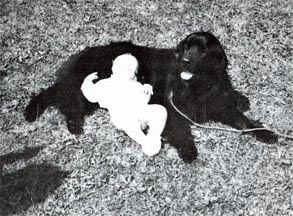 When Wilma Lister came home with a poodle puppy, Bob took one look at it and announced that he was going to buy a good dog. Being a tugboat captain he wanted a good boat dog. So he set off to the library to consult the AKC book. After much research he decided upon a Newfoundland. 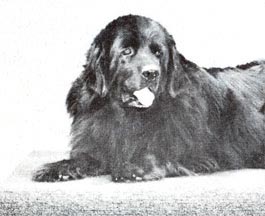 For the next six months the Listers searched for a puppy but there were none around. Finally they located a Newf on the Cape, the first they had ever seen, and the owner put them in touch with Kitty Drury. Kitty in turn sent them to Polly Loring at Newfield Kennels where they purchased Newfield's Gale A'Noreast (Norie), a daugher of Dryad's Goliath of Garth. That was in 1962. 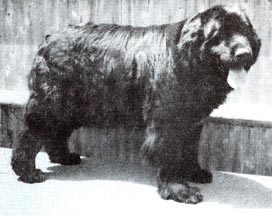 Several months later Norie was to be joined by another puppy. the future champion, Dryad's Compass Rose. Rosie was bought for the Lister's daughter, Christine who wanted a Newf of her own to show. As it turned out it may have been the nicest present any parent ever gave their child. Rosie was by the immortal Ch. Newton and out of Dryad's Christmas Holly. One always thinks of Rosie inheriting all her greatness from her sire. when in fact she greatly resembled her mother, a lovely bitch that has been overlooked because she was not shown. As a point of interest, two of Rosie's litter brothers became studs of considerable influence, Dryad's Teddy Bear and Janet Levine's Ch. Dryad's Yogi Bear. 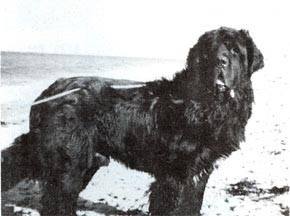 The first three litters that Shipshape produced were nice but did not have the type and bone that they were looking for. Bob realized that they needed a dominant stud. After looking at many puppies and dogs they felt that Dryad's Sea Rover was the dog that they needed to improve their breeding program.

A huge goofy dog with puzzled eyes an'd paws that covered a saucer. the Listers' fell in love with Rover and brought him home to live with them. He was to stamp Shipshape with his incredible type and bone. 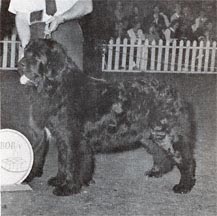 Bred to Norie he was to sire one of their best dogs, Ch. Shipshape's Jib. Co-owned by the Dibbles and the' Becks, Jib won the Western Regional Specialty before his untimely death at a very young age. Though he only sired two litters he proved to be an extremely dominant stud. like his father. Rover was bred to Rosie only once and it was probably Shipshape's finest litter. Unfortunately the puppies had a bad experience with measles vaccine and a virus hit the litter of eight. Only four survived, three of them shown to their championships and what a threesome; Shipshape's Tugboat, Shipshape's Misty and Wilma's own great Ch. Shipshape's Cutty Sark (Scotty). 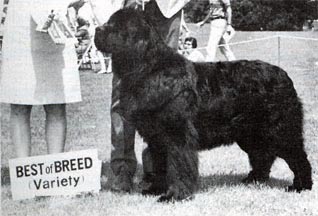 Scotty was to finish with five straight majors. The problem was that Scotty was not a showman. You could tell that he would rather be almost anywhere than in the ring! Therefore he was only shown a few more times before being retired to stud. Still he managed to end up 1965 as No.5 Newf. It was as a stud that Scotty was to make his real mark on the breed. Dominant for head and bone he became one of the most widely used studs in the country. To date he has sired more than 20 champions. 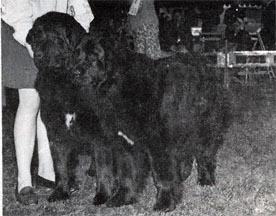 As for Rosie she became one of the greatest bitches in our breed's history . . . and in a sense she became Shipshape. A top show bitch (she got a group placement when she was nearly seven), she was incomparable as a brood bitch. Looking at pictures of Rosie, her daughters and granddaughters it is almost impossible to tell them apart. She was extremely dominant and it is due to her influence that Shipshape has produced such unusually fine bitches. 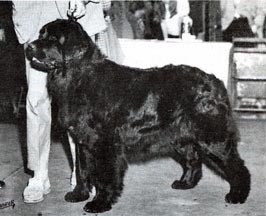 Rosie came as close to producing herself as she could, when she produced Ch. Shipshape's Sybil. Sybil was without question the finest bitch that Shipshape ever bred. The foundation bitch of Betty McDonnell's Kilyka's Kennels. She has produced amongst others, Fran and. Bob Dibble's Ch. Kilyka's Jupiter Rex, a national specialty BIS winner; Libby Keefer and Betty McDonnell's Ch. Kilyka's Black Bart, a BIS winner and the Helming's much admired Ch. Kilyka's Jessica of Pouch Cove and their Becky-Jo (watch for her!). 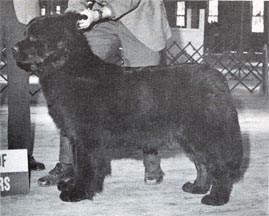 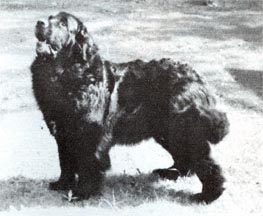 Today Rosie is gone and so is Manda Lifeboats, but Scotty is still quite a dog and at nine Berry can still outswim the Lister boys. As for Norie, well Bob is convinced that his good boat dog is going to live for ever! But Wilma, what we want to know is, where is the Poodle?

An Interview with Wilma Lister 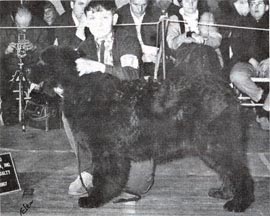 How do you go about picking puppies?

I pick puppies first at birth, type is very obvious then. Heads can be compared, bone and body length is easy to measure. I appraise them again at 8 weeks. Bite, eyes, ear set, length of neck, proportions, angulation and tail set. I check the same things when they are 3 months old and then I forget them until they are a year old. If you are lucky enough to have a sound mover you will have a good dog.

What do you look for in a Newfoundland?

I look for a good Newfie personality, then good bone, nice tight feet, good topline, balance and a good head. It must have a good head. A good head must have a dark eye, proper ear set, a square muzzle and a good bite. To my way of thinking the most serious fault is a bad bite (undershot), as I believe it destroys expression. I dislike light eyes for the same reason. Also light bone because I feel that it throws a dog off balance.

Years ago many of the greys had bald ears and tails. Breeders did everything that they could to find out why. Finally they found a link with other breeds that had greys and the same problems. The vets said it was a weak color gene and baldness could come out now and then. In the past few years there have been some great greys with no obvious problems. I've had many greys but very few good ones. I've never bred a brown. I'm concerned with the fact that both colors are recessive in most of our lines and in the future it may be impossible to breed an all black litter.

I also see Newfs with grey and tan undercoats, which when in full coat are not a good shiny black. I am also concerned with congenital problems that seem to concentrate in some color lines. I am not as concerned as most about mis-marks. I've had a few litters with mismarks and find them rather attractive. I do believe however they should be identified and noted in pedigrees.

How have you managed to produce dogs with such outstanding bone?

Good bone is dominant if line bred to lines with large bone. We were very fortunate to have seen many of the great dogs in our pedigrees. We saw bone with our own eyes and tried to keep it always. Dominance comes from continued line breeding. We decided on a line and stayed with it except for two outcross litters.

How would you describe the Shipshape look?

I don't know. I like to think' that we have tried to breed type according to the standard. There are too many different "types" in Newfs. There should be only one, the correct one. We have produced better bitches than males. We have been more interested in breeding good Newfs rather than great show dogs. I've never been overly concerned that a good show specimen went to a good show home. I've gotten great satisfaction from letters, Christmas cards and pictures of pups placed in "pet" homes. I've never thought the financial compensation of a show home was equal to the headaches involved.

What do you find to be the most outstanding virtue of the breed?

Temperament. Although the breed as a whole has still retained the good Newfie temperament I worry that over breeding will slowly affect this too. There is a fine line between shyness (spooks) and over agressiveness. An over agressive Newf can be a terrific problem to the family that just is not capable of handling it. Fortunately shy Newfs seldom show viciousness as in many other breeds.