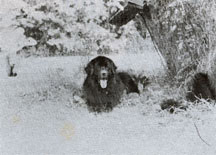 Indigo Kennels began in a supermarket. In 1961 Pauline and Myron O'Neill encountered an elderly lady in a supermarket being calmly followed by a huge black dog. The ensuing conversation convinced the O’Neill’s that the Newfoundland was the breed for them. As they were living in an apartment they put off acquiring their first Newf until they moved to their property in Rollingsford, New Hampshire. They took their kennel name from Indigo Hill; a small hill on the property that at one time had been covered with the small indigo flower.

Their first Newf was Indigo's Cape Elizabeth ("Betty") purchased 'from an ad in the Boston Sunday Globe for $150. Her sire, Ch. Sciopio of Shipmates, was a group winner wit4 good movement, squareness, and top line. Her dam, Midnight Mist OF Hidden Hill, was a large bitch with good bone. The O’Neill’s have never heard from Betty's breeders and feel that they never produced another litter. 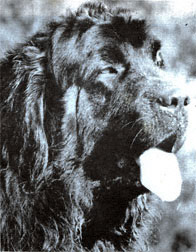 Betty developed into a large bitch with huge bone and a good topline but a lack of head so in breeding her they looked for a stud with head, finally selecting Ch. Edenglen's Sovereign of the Seas. The resulting litter of two males and eight bitches was one of the most significant litters ever bred, producing Ch. Indigo's Bozo the Clown, Ch. Indigo's Fritzacker, and Ch. Indigo's Point Judith: The results were what the O’Neill’s were seeking - size, bone, topline, and head.

When Betty's puppies were four months old Betty came up lame after chasing another dog from the yard. The x-rays showed her to be dysplastic and the O’Neill’s, still novices at that time, were made to equate dysplasia with crippled and had Betty put to sleep, hence the potential of this great producer was never realized. 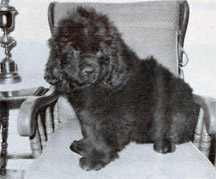 The O’Neill’s then purchased two small bitches of the Perivale and Dory-O line, Indigo's Suzie-Q and her mother Princess Chris of Salisbury, hoping that they would produce soundness when crossed with Bozo and Fritzacker. The resulting pups were square and healthy but lacked bone and head so the O’Neill’s decided to try for a more line-bred male to breed to these two outcrossed bitches ... Enter Indigo Onyx. Results were better but the O’Neill’s still feel they would like a larger dog and hope their current breedings will produce more size.

An Interview with Pauline O'Neill

What qualities do you like to see in a show Newfoundland?

I like to see a big, well-balanced dog, moving free and easy with a happy expression. Qualities that turn me off are a hang-dog look and a reluctance to move in the ring.

Do you handle your dogs in the ring?

We have finished all our own dogs; shown them to several groups wins and a national specialty win, and are proud of it! We want dogs that we can show ourselves and win with.

What are your views on Newf breeding in general? 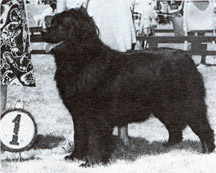 I think all Newfs have some redeeming values. If the dog has enough going for him and the owner is honest about his faults (be they heart, hips or temperament) he can be used for breeding, simply don't breed to a dog with the same glaring fault. What is most important is honesty and being able to tell what the good features are.

What qualities do you look for in breeding stock?

We are breeding for a sound-moving dog that is large but well balanced with dark eyes and a happy temperament. Most of all we want a dog that will consistently reproduce these qualities.

How much emphasis do you place on x-rays?

X-raying is ridiculous. Soundness to us is good moving not good x-rays.

Are you opposed to colored Newfs?

I feel that a good dog is a good dog regardless of color and that to disqualify a good percentage of our presently registered Newfs is not in the breed's best interest. What if a cream colored dog or a Landseer with too much white is produced? So what! Let all colors be shown and the merit of the dog be judged accordingly.

How do you evaluate a Newfs temperament? 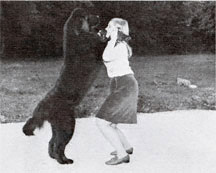 In breeding for a lively show dog you are going to get varying temperaments and people interpret temperament differently. A dog that goes after another dog is vicious to some people and to others it is spirited. To me the Newf is not a completely docile dog. I think we do the breed more harm than good when we say that Newfs are "great with kids". They are all individuals and should be treated as such. I feel that much of the aggressiveness in Newfs stems from the fact that such large dogs often have difficulties breeding so people choose the stud who will breed anything anytime, overlooking the quieter stud who could probably be bred with time and patience. The same may hold true for the bitch that has to be held to be bred.

Do you think that the sire or the dam is more dominant?

Myron and I both feel that the dam is. Myron feels that she contributes 80%. We don't always agree on this dog game - where he gets the 80% I'll never know!

How do you pick puppies? 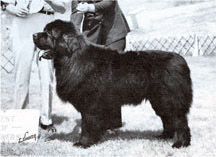 We cross our fingers and toes, close our eyes, and feel for the biggest head and bone, hoping like heck that the rest comes along! All kidding aside - it is very difficult to pick out the best puppy at eight weeks. We can compare the puppies in that litter but it might be the best of a bad lot.

What do you feel your dogs have contributed to the Newfoundland breed?