Recently the dog world lost one of its most prestigious individuals. Mrs. Beatrice Godsol died in March after a period of illness. The Newfoundland was indeed fortunate to have had someone of Mrs. Godsol's stature to represent it.

Bea Godsol was raised with animals as a youngster and she carried her love of animals throughout he' adult life. She raised many top show specimens, was active in obedience, was one of the few female all-breed judges and was an active member of many dog organizations. Besides her interest in dogs, Bea was involved with horses, riding with the Meadowbrook Hounds on Long Island for many years, and she and her husband, Major, raised purebred Suffolk sheep. As with their dogs, the Godsol's bred some of the top Suffolk sheep in the country. 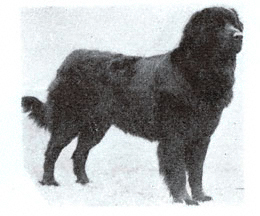 As a judge, Bea was well known for her knowledge of dogs and her gracious ring manner. She learned much of her judging from the late Alva Rosenberg, by stewarding for him all over the country during the 1930's. She judged many Newfy Specialties and judged at most of the dog shows in this country, including Long Island Kennel Club, Beverly Hills, International and Best in Show at Westminster. She was invited to judge in many other countries also. For example, in 1951 she judged a world record entry of 236 Poodles at the International Poodle Club championship show in England-a tribute to her well-earned reputation. In 1950 she won the Gaines Award as the outstanding judge of the year. Major was also an internationally recognized judge, being the first person to judge all breeds and all obedience and tracking classes.

Bea's interest in Newfies went back many years. Her grandmother came from Nova Scotia and one day while Bea was going through an old trunk, she found a black fur blanket which she thought was an old bear skin-it turned out to be a Newfy skin! Bea and Major owned Coastwise Kennels which produced many lovely Newfoundlands, many of whom are in the background of our Newfies today. It would do us all well to remember the Coastwise Kennel Code:

• To pay special attention to bitches
• To study grandparents rather than parents
• To keep careful breeding records
• Not to rush to every new stud with a name
• To try and read a pedigree by breeding facts, not names
• To put away all culls and weaklings at birth
• Never to sell or give away an excessively' shy or nervous dog
• Never to sell any dogs the kennel cannot be proud of
• To make good on any dog sold that may not turn out satisfactorily
• To breed dogs for intelligence and disposition as well as physical perfection. 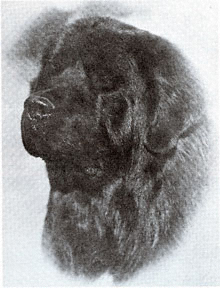 The foundation stock of Coastwise Kennels came mainly from Waseeka Kennels. Bea's first dog was Waseeka's David whelped in March 1932, but it was her second dog from Waseeka, Ch. Waseeka's Skipper (whelped July 1932), who was to playa more important part in her breeding program. Her next two Newfs were Ch. Mark Anthony of Waseeka, CDX. and Ch. Cleopatra of Waseeka, CD. who were the sire and dam of her first litter whelped January 7, 1935.

Susan Tall was a Siki granddaughter Bea used once and Connie of Kingsley was another brood bitch. In 1937 Bea imported Bulwell Magnificent from England only to have the dog die a few,weeks later. From Canada came the bitches Shelton Gipsy Nora, Marina of Orumnod and Perivale Sea Shell. In 1951 she imported Harlingen Windlass from England and the bitch Saskia from Holland. In January 1952, Bea wrote to Lillian Page (then Secretary of the NCA), "We are practically out of Newfs and don't plan any more breeding, at least for a while." Major was a Field Representative for the AKC at this time and when he resigned from that position, they spent more time judging. Meanwhile Bea had spent more than twenty years breeding and showing Newfoundlands.

Bea kept careful records and whenever she researched a pedigree she was sure to mark down, not only the dog's color, but also what he produced. For example, when Dryad's Coastwise Sailor Boy was bred to Coastwise Shore Leave (Linda) they produced six blacks, three greys, and one "tan." Sailor was bred to twelve bitches and never sired anything but a black puppy and Linda had five later litters and never produced anything but a black puppy. At that time Bea stated, "It is impossible to get a complete out cross in dogs of desirable type in the breed today." 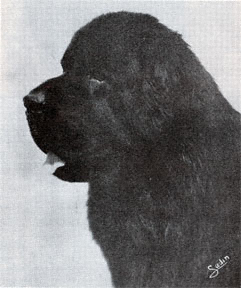 One of the most famous of the Coastwise dogs was Ch. Coastwise Steamboat Bill (Barry). Barry was the first Coastwise homebred champion, but more importantly he was Bea's traveling companion. While driving through a snowy mountain pass they met another car head on and their car was overturned and Bea was thrown out in the snow. Barry lay next to her with his head on her chest and kept her warm for several hours. He refused to leave her side when the ambulance came and sat next to her on the long ride to the hospital. He would not leave her when they arrived at the hospital until Bea told him to guard her coat which Barry did until Major arrived. Bea always credited Barry with saving her life.

Coastwise Kennels was very active in showing on the West Coast in the 1930's and 1940's and they had many group placements. Their 1935 record included three championships, nine Best of Breeds at ten shows, thirty-five points and six group placements-one first, one third and four fourth. Among the group placers they owned were Ch. Mark Anthony of Waseeka, COX (the first Newf to win a working group on the West Coast), Ch. Coastwise Steamboat Bill, Ch. Waseeka's Skipper, Ch. Cleopatra of Waseeka, CD., Ch. Dryad's Coastwise Showboat (the first Newfy bitch to ever go Best in Show), and Ch. Coastwise Oenobie's Old Salt (the second Newf and first Landseer to go Best in Show-at Orange Empire, August 30, 1942). When Ma Anthony won the working group at the Long Beach California show in 1935, the judge, Albert Gardner, commented, "The Newfoundland went tops because he was not only typey, but absolutely sound everywhere and in the pink of condition." Unfortunately Tony died in 1936 at the age of 4Y2. It is his head study which is on the official AKC bookplate designed by Edwin Megaree. From Kennel Review of September 1937 "the Hilton's from Coastwise swept all opposition aside in Newfs ... These superb specimens surely deserve more consideration in the groups than they are getting."

Though the Godsol's greatest love was for their Newfies, they also had successful show careers with other breeds. Sealyham Terriers were a favorite and they also had fine specimens of German Shepherd dogs, Golden Retrievers, Shetland Sheepdogs and Dandie Dinmont Terriers. I am sure that it is safe to say they are the only people to own dogs who went Best of Breed at the National Specialties of five different breeds (Newfoundland, German Shepherd, Golden Retriever, Shetland Sheepdog and Dandie Dinmont). 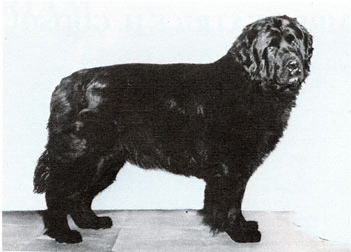 In addition to showing her dogs in the breed ring, Bea was very active in obedience. Her philosophy regarding obedience training was stated in Dogdom Magazine, July 1936 in reference to Ch. Waseeka's Sailor Boy who in fourteen shows on the Midwestern circuit had fourteen Best of Breeds, one Best in Show and thirteen group placements. "It is interesting to note in this connection that Sailor is obedience trained. I have prophesied for some time that obedience tests started in the East will soon sweep the country, and what more fitting medium is there for showing off the ability of these dogs? Anyone who has gone into the show ring with a hundred pounds of untrained puppy on the other end of the leash appreciates the difference between showing a dog who will pose and heel at command, and obedience tests seem to be a step in the right direction toward this end. A Newfoundland, while not as alert as a Shepherd or Doberman, is very willing to learn and never forgets his lesson once he understands what is required of him." In March 1937 Bea wrote in Dogdom Magazine "What we believe to be the first meeting of a Novice obedience class in Southern California took place at the Coastwise Kennels." She became president of the California Training Class of O.T.C and in 1938 in Kennel Review, Helene Walker wrote "Our California Training Class, which was the third to become established by the O. T. C, under the very able guidance of Mrs. Hopkins Hilton (Bea) and her very efficient and enthusiastic assistants, has become the second largest training class. It is to them that full credit should be given for the development and keen interest attained toward this work on the West Coast."

Bea went on to obtain the first CD and CDX awarded to a Newfoundland on her Ch. Mark Anthony of Waseeka, C.D.X. In 1938 her Ch. Cleopatra of Waseeka, CD. won the Pilloc Trophy awarded yearly to that obedience trained dog of any breed (having won the CD. title) which wins the highest score throughout the year. She achieved a 97 out of 100. In 1936 Universal Pictures made a newsreel of the "Coastwise Life-Saving Corps" who were spending the summer at Big Bear Lake, California. The Coastwise Newfs were also used for backpacking and carting. True working dogs. 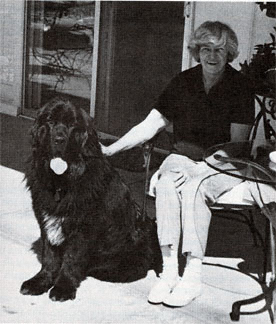 Bea was a member of the N.C.A. since 1933 and held many positions during her years with the club. She was second vice-president from 1935 to 1946 and served as secretary from 1947 to 1949 during which time she revived the AKC Gazette column, established breeder lists, publicity lists and check lists for specialty shows. Publicity was very important, for during the war years interest in the Newfoundland and the N.CA. had declined. She also worked very hard to accomplish the 1948 National Specialty, the first Specialty since the war. While Bea was secretary, Major was a delegate to the AKC from the N.CA. Bea was a board member in 1950 and 1952 while in 1951 she was elected president of the club. In a letter to club members April 5, 1951, Bea wrote "As the new president of the N.CA. I feel a very deep responsibility to our breed. The success of the club and the progress of our breed in the coming year will be the yardstick by which I must measure my term of office .... It is my ambition to have a club that really represents all the breeders in the country and derives its power and impetus through close and interested contact with all individual breeders and owners. It is only by helping and educating new people that this can be accomplished .... While I am in office, I hope that we can maintain high standards in the raising and selling of good Newfoundlands and increase the size of entries at shows ... " During her year as President, membership in the club increased by seventeen to sixty-six and a Specialty was held in Armonk, New York June 9. She was also made an honorary member of the English and Dutch clubs. She worked very hard in helping the club write "This is the Newfoundland" and she and Major wrote the chapter on the standard. Some of the other clubs of which Bea was an active member were Santa Barbara, Long Island Kennel Club and the Westminster Foundation.

Bea remained interested in the Newfoundland even though she had retired from dog show judging since 1970. Only a year ago she bought a Newfie for a friend and she loved to have them come visiting so she could have a Newfie head in her lap again. We shall all miss this great lady.

Others Are Called Great To Many Fanciers Bea Godsol Was The Greatest Of Them All - The Canine Chronicle, April 2012